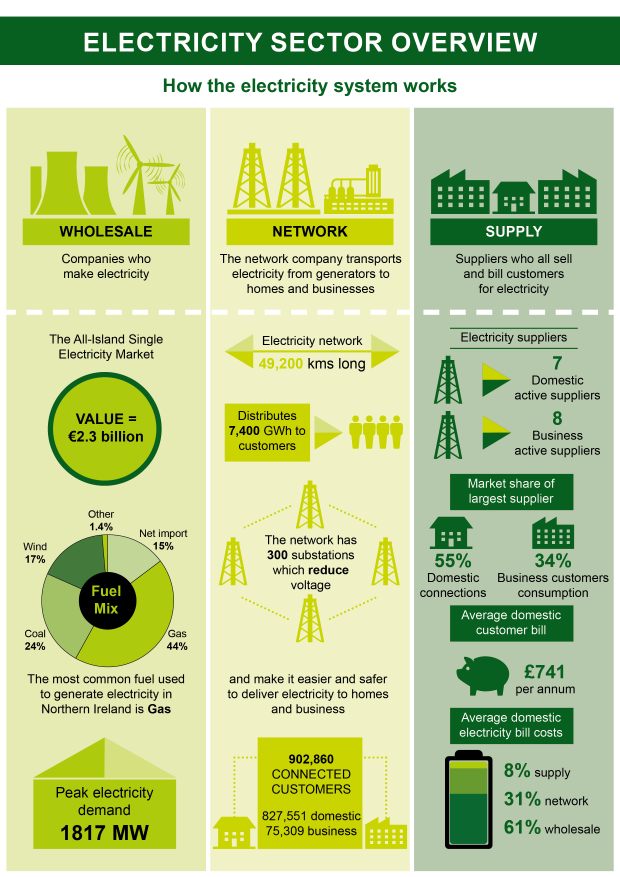 The electricity industry in Northern Ireland was privatised in 1992-1993.

Northern Ireland has three fossil fuel generating plants at Ballylumford, Kilroot and Coolkeeragh which sell electricity into the SEM pool along with other generators, including renewable energy. Mutual Energy Limited also supplies electricity to the pool via the Moyle interconnector.

As for the rest of the UK, there are separate licences for each component of the value chain, with some companies holding multiple licences. The regulator ensures that each licensed activity is ring-fenced  from other activities in the same group of companies. All consumers have metered supply, but more sophisticated meters and tariffs are used for industrial consumers than for households.

A transmission licence is held by NIE Networks Limited in respect of the main transmission system. A second is held by Moyle Interconnector Limited, a subsidiary of Mutual Energy Limited, formerly NI Energy Holdings (a mutualised company), who run the Moyle Interconnector assets linking the system to the GB system in Scotland. NIE Networks also hold a distribution licence for their distribution system.  The Utility Regulator also sets price limits for the monopolistic components of the electricity industry and ensures that end prices for consumers reflect efficient costs and reasonable levels of profitability.

The electricity industry operates a single wholesale market across the whole of the island of Ireland this is known as the Single Electricity Market or SEM. This means that all electricity across the island is bought and sold through a single pool, which has increased competition, efficiency and security of supply. The operation of this single wholesale market requires the physical connection of the Northern Ireland grid to that in the Republic. The existing connections are proposed to be enhanced by a new North-South transmission connection which will enable greater flexibility in the flows of electricity.

The operation of this market is facilitated by the Single Electricity Market Operator (SEMO).  SEMO is a contractual joint venture between the two system operators - SONI in NI and EirGrid Plc their counterparts in the Republic of Ireland. SEMO facilitates market trading, co-ordinating financial dealing and ‘owning’ the rule-book. The Utility Regulator and it’s counterpart in the Republic, the CER, regulate the SEM through the SEM Committee, on which both regulators are represented along with an independent member. This committee monitors the operation of the market and takes action to avoid any abuse of market power.