“In October, we received a submission from Firmus Energy to undertake an ad-hoc review of their regulated Ten Towns tariff for domestic and small business[1] consumers.

“We have now analysed and evaluated Firmus Energy’s submission and consulted with the Department for the Economy and the Consumer Council for Northern Ireland. This review has unfortunately concluded that a 38.18% increase from 3 December 2021 is needed to reflect the exceptional price spikes that have been experienced in the global wholesale market over recent months.

“This will regrettably mean that the average annual household gas bill[2] in the Ten Towns licence area will increase by £267 per year.

“For historic comparison, the table below shows how Firmus Energy’s regulated tariff in the Ten Towns licence area has moved since 2015.

“Unfortunately, over the last six months, we have seen unparalleled increases in the cost of wholesale energy at a global level. The rising market has been further exacerbated by the overall volatility within the market, with significant price movements occurring on a daily basis.

“Currently, it is unclear how long these higher global prices will last, but increasingly market analysts are talking about higher wholesale prices for the next 18-36 months. However, if wholesale prices begin to reduce, our system of regulation in Northern Ireland allows us to act to make sure that reductions are fully passed onto consumers as quickly as possible.

“The reason that these global movements impact consumers here in Northern Ireland is that they make up more than half of a consumer’s bill. For example, the make-up of a typical Firmus Energy gas bill is as follows: 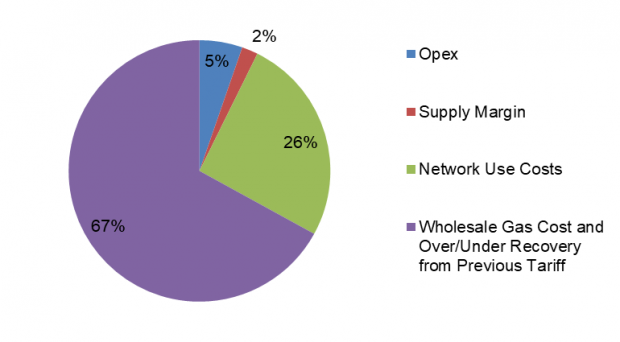 “We are extremely aware of how this further energy price increase will affect consumers in Northern Ireland. That is why we have established a working group with the Department for the Economy, Department for Communities and the Consumer Council for Northern Ireland to actively explore what practical measures can be brought forward to alleviate the burden of these higher prices on consumers, this winter.

“I have written to all energy suppliers and reminded them of their regulatory obligations to avoid customer disconnections and consider other approaches to protecting customers in debt. We are also following this up with individual meetings with all energy suppliers, to ensure they are doing all they can to support their customers.

“I would encourage anyone worried about paying for their energy bill to contact their supplier as soon as possible. There are also a number of agencies who can provide free and independent advice, including Advice NI, Money and Pensions Service and Christians Against Poverty.”

A briefing paper has also been published.